How to achieve your dreams in real life

How to achieve your dreams in real life

Mikael Avatar uncut for over an hour. The story in a new vintage for those of you who didn’t hear his story. His father beat his mother so seriously that Mikael Avatar was prematurely born. Has hardly hindered his progress in life …

Uncut means the video is completely uncut. Enjoy more than an hour with him …

I only have one good cerebral palsy bodybuilding story. That’s when I meet Nabil. An Egyptian bodybuilding profile.

Nabil Abdel Kader, born in Egypt, but living in Sweden. Now at the age of 80. He won a major bodybuilding competition in 1971 or 1973. Whether it was World Cup or Mr Universe, I have no idea.

At his gym in Stockholm hung a photo with Nabil Abdel Kader where the boxer Muhammad Ali handles his biceps. At that time, echo, the quote: It’s me, Björn Borg and the Pope who is the greatest on earth, Muhammad Ali.

I’m not Christian but raised in Södertälje (Sweden) where tennis player Björn Borg grew up. And to meet Nabil where the quote from Ali, it was like became closer to my reality.

I work in Nabil’s gym thanks to my mentor Abdo. This was many years before I started training for Paralympics. Nabil told me that my biceps had a perfect shape for development in bodybuilding. Nabil seriously thought that I would work out for bodybuilding.

Every time I was in the gym he talked to others about my biceps and many times I had to tense my less handsome arms, which I thought, so people could see my biceps form.

20 years later I talk again with Nabil Abdel Kader and told me about my achievements in athletics. He still thought that I would practice bodybuilding and I was not even 40 years old. There was no bodybuilding career for me.

Nabil told him that he ate 20 raw eggs and drank 12 liters of milk a day when he competed. A diet I probably would not manage …

Abdo (Abdelrahman Elkhatib *) who took me to Nabil has made me understand how much the music means to me. My first mentor Abdo taught me the music world and its creation. Today, when I make music, Abdo is all the time with me. Nabil is one of many profiles of people I’ve met through Abdo.

This story is just one of many in my life bank … Thank you for reading here. Please leave a comment what you like about my stories …

* Abdelrahman Elkhatib (Abdo), the noted Egyptian composer, died in Cairo 9 June 2013 at the age of 91. A well-known musician and teacher in his own country. he had taught at the Cairo Conservatory and was for a time head of the Music department of the Ministry of Culture in Damascus. In 1950 he was asked to compose the music for the National Anthem of Saudi Arabia.

At the delivery of the Nobel Prize for Literature to the Egyptian author Naguib Mafouz in 1988, Abdo performed at the Nobel dinner in the City Hall of Stockholm.

I move from home when I start high school in another city. Maybe I was around 17 years old. So for a year, I lived on the week, 2 hours away by car, from my birth family.
Residing with a family but I had to do food, laundry and everything else you have to do when you live yourself.

My growing up was special, what I think. I have calculated that 17 people lived with us between what I was the age of 7 years to 15 years. Then I have only counted those who lived more than 6 months. For four years we had 6 Indians living at home with us. Had famous musicians living and in principle were all living artists. So maybe it’s not that strange that I’m an artist.

With all these people, different norms were created. So I have learned a lot of different systems how people can live a life. So coaching is one of my specialties.

In addition, I was always in motion and lived regularly with different types of people. I have registered at 300 addresses and my sports career meant that I was constantly in hotels and training camps in my native country, Sweden and abroad.

My first apartment was probably not until I was 24 years old. Then went to the author’s school. Before I was 2 years old in an elite sports college. This was 1992. Did not come to Paralympics then, but only 4 years later, Atlanta 1996. After that, my life begins. I had no idea how to live a life. I seriously thought that anyone who did not train to the Olympics had a meaningless life.

1996 after Paralympic, my company started to work seriously. I speak to people. They told me you are not wise believing you can feed yourself to talk, but they were wrong. The public speaking industry is now (2017) one of the largest businesses in Sweden, not knowing much about other countries. But in 1992, when I opened my company, there were few who lived in public speaking.

The public speaking profession is a lonely job, just like pianists or other around traveling professions. You have your show and you will end up alone in a hotel room somewhere. Many times, you do not know the city you are in. My relationships with women were not my best subject. I was so busy by my athletes and I did not see all the women who fell in front of my legs, literally.

My present wife, Gai and her two daughters. With Barbro my first wife who was visiting a number of years ago

Beginning in the 2000s, I realized that I should engage more in this subject and soon after I meet my first wife. Had lots of strange untouched relationships before, but with her life became more stable. We were both public speakers and yet we have contact regularly. My current wife calls her big sister. Without my first wife, I had been a lost soul on the planet Earth. 2009, when I moved to Thailand, we divorced. I needed to take care of my cramps and pain in the body in the heat and in her life, there were grandchildren and other things that made her stay in Sweden. I do not have my own children, but both wives, or how to express myself, have grandchildren.

This story of my life is not especially about Cerebral Palsy living independently, but more about how a life can look, but I have a CP injury. I want to highlight that I lived a fairly common life from the perspective of life issues everyone poses.
How to move from home the first time by yourself, school, profession, get family and more. Of course, I’m a bit extreme, professional career.
My first job was elite athletics, world record holder in the long jump, for my injury class. Then public speaking, coach and now artist musician.
Has also worked with other things, for example, a research assistant for a number of years on the subject Cerebral Palsy. 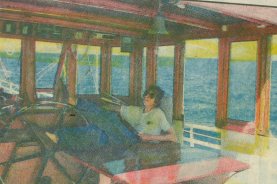 I only meet one person who sailed across the Atlantic since I did it in 1988 and I meet a lot of people.

Most people do not move to another continent or another country. I know no CP-injured who have moved permanently from Europe to Asia, but there are surely more than me who changed continent. I can say that it’s a big change that takes many years. Since I moved 2009, to Thailand, my life is totally different. I am much happier and live my passion, in a different way than I could ever have done in Europe.

Cerebral Palsy living independently
Living independently of other people when you have a differentiation is not so obvious.
I forget that, according to a doctor, I have a CP injury. People assume I live with a 24-hour servis and my wife cares for all chores and supplies me. OJ .. Yes, I have a wife.  Swedish, svenska klicka här http://mikael-avatar-stjernvall.blogspot.com/2017/04/cerebral-palsy-living-independently.html

Not even this is obvious with a wife, if you do not know who I am.

The next thought that arises is: How does she think when she lives with someone like me. What made her choose me … the more people think the more questions arise. How does she provide him it can not be easy. Then add that I’m an artist and create abstract paintings, with abstract music. Not even my wife understands what I do and how can this be explained to any human being?

My wife makes it easy and says … I drive a car and have a driving license. Mostly he drives a motorcycle.
By saying this, this solves many mysteries about our relationship. We are ordinary people and he can drive a motorcycle. Since I moved to Thailand 2009 I did not see a single person with disabilities driving a car or motorcycle. At least in Thailand, very unusual.

Yes .. I do not cook food so often. Maybe sometime a year. Not because I can not.
That’s because my wife has worked as a 5 star chef for 15 years. Her passion is food. The biggest thing she did was as First Chef with 10 others, serving 10,000 guests at the same time.
When you see her in the kitchen, it’s like watching a ballerina dance at the highest level. It’s just a blast of energy. I promise I have nothing in the kitchen to do.

My starting point when it comes to food is that there is some unnecessary pain that man has to do daily. It steals time to make other sensible things …. So I think it’s a good idea that in the kitchen I will not be …
This creates problems. It is rare to go out and eat locally. The food is too bad and when we go out, it often happens that the chef asks my wife to make the food as she is a famous chef …

Among the few times I cook is when the oldest daughter comes and then there is genuine Swedish home cooking on the menu. It is high in courses on the Thai family menu when daughters are tired of Gourmet food ….

Artist Mikael Avatar was born and raised in Sweden and since 2009 live full-time in Thailand. 30 years working as a coach Over 20 years, appreciated, Public Speaker Former world record holder in the long jump at the Atlanta Paralympic Games in 1996 Last 10 years active with the creation of the art form Energy Art. Several exhibitions in Thailand and also Sweden He has resumed music creation and make your own movies with music He has the ability to capture things in life, which looks obvious out. But he gives these small things, a different meaning, and suddenly there appears a whole new meaning in life.